Literary Review Children's Christmas Round Up 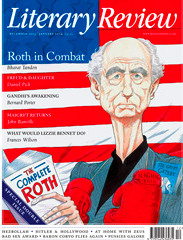 Yes, ladies and gentlemen, the December / January super-soaraway-bumper edition of Literary Review is out NOW, and in its already brimming pages you'll find my round up of children's books for Christmas, featuring:

The Hanged Man Rises by Sarah Naughton,
Lockwood and Co by Jonathan Stroud,
Goth Girl and the Ghost of a Mouse by Chris Riddell﻿,
The Dead Men Stood Together by Chris Priestley﻿,
Close Your Pretty Eyes by Sally Nicholls,
Hello Darkness by Anthony McGowan﻿,
How to Be Invisible by Tim Lott,
Rose Under Fire by Elizabeth Wein,
The Company of Ghosts by Berlie Doherty,
Hold Your Breath by Caroline Green,
Oliver and the Seawigs by Philip Reeve﻿ and Sarah McIntyre﻿,
and Runners  by Ann Kelley.